What is Uber Surge Pricing?

What is Uber Surge Pricing?

One of the main differences of taxi and Uber is its surge pricing. So, what is it exactly?

From the official Uber Support article:

With surge pricing, Uber rates increase to get more cars on the road and ensure reliability during the busiest times. When enough cars are on the road, prices go back down to normal levels.

It’s important to know that you’ll always be notified in big, bold print if surge pricing is in effect. When rates are more than double, the surge confirmation screen also requires you to type in the specific surge multiplier to ensure you understand what rates to expect.

You always have the option to wait for the surge to pass. There’s an option before requesting for an Uber to accept the surge pricing or to notify you when the fare is back to normal.

How do you know if there’s surge pricing? Look for the lightning icon. Refer to the pictures below. 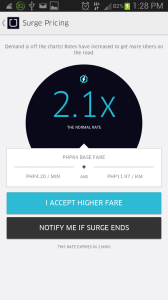 Here’s a sample fare calculation with surge pricing of 1.3x. All of these are available in your trip history in your Rider Dashboard. Uber also emails you the trip invoice showing the fare calculation.

For some people, surge pricing is a deal breaker. But personally, I consider surge pricing a fair trade off for the level of service and value Uber provides. In a normal taxi trip, taxi drivers usually ask for a tip ranging from Php 10-50 pesos or sometimes they don’t give you change at all. As a rider, I usually feel like I’m being robbed or cheated because the level of service is not one that deserves a tip.

At least with Uber, you are well aware before you request for a ride of the price surge and you are assured of the standard of service.

Have you tried riding with surge pricing? Share with us your experience! Happy Riding!